How to Check a Bathroom for Leaks 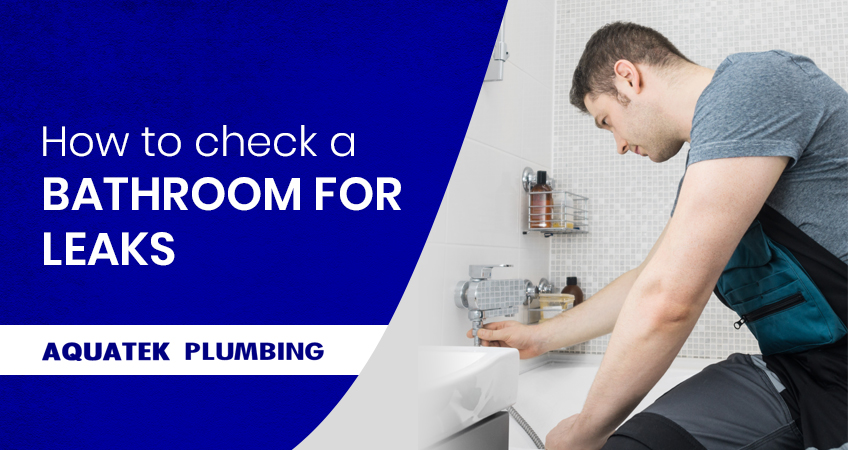 When it comes to leaks in the bathroom, normally the first sign will be water stains on the ceiling of the room directly below. This is usually a sign that the leak has caused extensive damage to hidden areas and you’ll need to call out a plumber to take a close look and repair the leak. Most plumbing leaks originate near plumbing fixtures like bathtubs, shower enclosures, sinks, and toilets. By taking the time to look out for some tell-tale signs that your bathroom could have a leak you could save yourself a headache and an expensive future repair bill.

Reasons the Bathroom Could be Leaking, and How to Check

Showers and shower seals could be one of the main reasons for leaks within the bathroom. It is always advised and a good idea to check all the seals of the shower first when trying to identify a possible leak. It is also a good idea to keep checking from time to time to find the early signs of leaks, as leaks can cause very expensive damage if left untreated for a long period of time. Major damage can be caused if the water is constantly leaking and coming into contact with the surrounding wall or floor.

Wooden floorboards and joists are prone to swelling and eventually rot which can result in an expensive replacement project where your shower tray or enclosure may have to be removed so that work can begin on the damaged area below. Things to look out for include peeling paintwork and rotting flooring. If you have vinyl flooring this is more of a problem as water puddles can cause the flooring to curl and deteriorate to such a level where it will allow water to come into contact with whatever is underneath, normally wood.

Shower curtains should be kept inside the bathtub when taking a shower to minimize the risk of puddles of water on your flooring. Mould spots on silicone and seals are another troubling sign. This can often indicate that there are gaps in any silicone that should be repaired. Check shower doors, check the condition of the rubber seals, check for gaps where the shower tray meets the floor. Sometimes sealant is used. If it’s rotten and has gaps, scrape it out and apply a new lot. Remember to make sure it’s completely dry before testing or using your shower.

The bathtub could also be a big source of leaks within the bathroom. Check all areas and seals for gaps. It can be difficult to spot some leaks as water tends to disperse very slowly.

Leaks from pipes can be difficult to detect because the pipe is often hidden away behind bathroom paneling and walls. In such cases, your first notion of a leak will be water stains on the ceiling of the room below.

Vinyl flooring is prone to rot and will often curl at edges from prolonged exposure to water. Always look and if there seem to be any changes or swelling of the floor below, then this could be a sign that a leak is there, and needs urgent attention.

Leaks around plugs and drains are one of the most common places where a leak can form in a bathroom. More often than not the water will leak slowly so it can be difficult to detect. The easiest way to test for a leaking drain or bath plug is to plug the hole and fill the bathtub with a little water. Check back after an hour to see if the water level has dropped. If it has it’s an obvious sign of a leak – although it could also be the seal of the plug stopper so be sure to check this too. It’s a lot cheaper than ripping a bathtub only to find that there isn’t any damage below.

Drain leaks are more common with plastic and fiberglass bathtubs. The same is true of shower enclosures and shower trays. The material is softer than a ceramic so it can move slightly as you maneuver on top of them. This can sometimes break the seal around the drain or plug hole which can allow water to escape onto the area below.

Toilets can also be a source of leaks in the bathroom. Most leaks that originate from a toilet are caused by a leak between the toilet and the waste pipe. This means that every time your toilet is flushed water will leak. Because your toilet is probably used more often than shower damage to floors can escalate quickly to become expensive plumbing repair jobs.

If your toilet moves when you sit on it, it’s a sign that you could be in trouble as over time the rocking could potentially break the flange seal and lead to a leak. Check the seals around the bottom of the toilet, where it meets the floor, to make sure that the toilet is secure.

Leaks around taps will often lead to an area that is hidden so detecting a leak can be difficult. Damaged seals and deteriorating silicone areas around taps and faucets can allow water to seep through and damage the area below. On sinks and basins, it’s usually easier to get a clear view of exactly what’s going on underneath the sink so pouring excess water around the top of the tap area and checking the area below is the easiest way to detect a leak here.

There can be many different reasons as to why there could be a leak in your bathroom, from taps, to faulty seals and damaged fixtures. The key with any leak is to catch it early, as said multiple times in this article, they can create really nasty and expensive jobs in the long run if not caught early. So, next time you are in the bath, or brushing your teeth or going to the toilet, from time to time have a look at all the seals and fixtures. Are there any changes? Do they look damp? Are they damaged in any way? This will help you save a lot of money and a lot of time in the future!