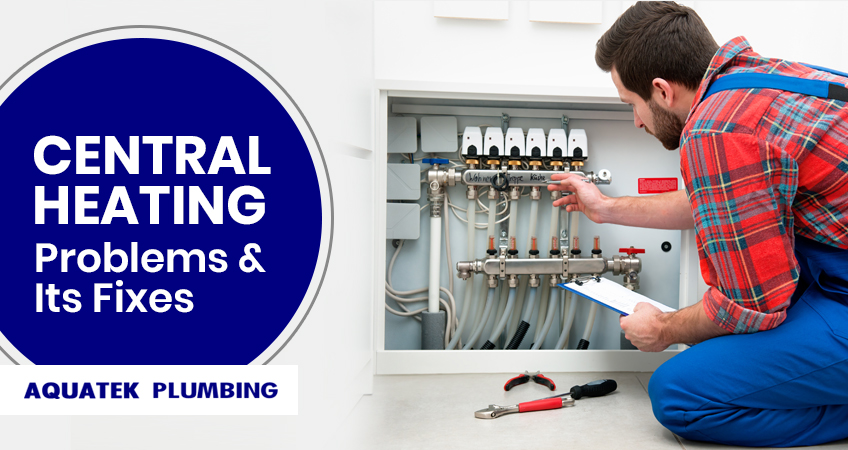 We all rely on our central heating systems, and that makes it even more frustrating when a problem arises with yours. These problems often arise when you turn them on after long periods of disuse. To avoid problems, you should turn the heating on periodically throughout the summer so those periods of disuse aren’t as long.

We’re going to talk about what can be done to fix any problems you might experience with your heating system, as well as some of the most common problems that might cause those problems to begin with. So read on now to find out more.

When it comes to fixing the central problems you’re facing in your home or commercial business, there are many ways to go about it. There are things you can do yourself, but there are many instances in which you should call the experts and let them take care of it instead. That’s always the case when the problem relates to something that you don’t really understand. You can carry out basic checks yourself but if further work is required, it’s best to let an expert take a look at it and perform the necessary work.

If your hot water taps are only reaching a lukewarm heat and your bath and sink faucets are not running hot enough, it might mean that there’s a problem with the diverter valve in your central heating system. It’s a problem that’s very commonly experienced, especially with older boilers. The function of the diverter is to get the hot water to your taps. It’s not the kind of problem that’s easy to fix by yourself, so it might be a good idea to call on someone with professional knowledge to assist you with it instead.

When you have a problem with your central heating system’s pump, it might be the case that there’s an underlying issue with the wiring. The pump might also have begun to corrode and as a result start leaking water. The only way you can really fix that kind of problem once it exists is to entirely replace the heating pump. It’s something that you can do yourself, but like many of the fixes and repairs here, it’s often better to trust a professional.

If you think your thermostat is broken, it might be because you’re noticing that the rooms in your home are overheating and the thermostat is doing nothing to stop it. It might also be the case that your water runs far too hot or that the tank is kettling, which means making a noise. Thermostat problems can be hard to pinpoint and explain, and that’s why it’s often best to get an engineer involved.

There are many issues that could be behind the boiler problems you’re facing. Broken internal components often cause problems such as leaking and dripping. If there’s a leak around the pipes of the tank, it might also be the case that corrosion has set in or that something has been fitted incorrectly. It’s best to call an engineer when it comes to boiler problems because you don’t want to take any risks. Boilers are often complex and difficult to fix if you’re not very familiar with their inner workings.

If you have a problem with your radiators remaining cold even after you’ve turned them on, it might be the case that there’s an underlying problem that needs to be addressed by a professional. But before you reach that stage, you should try checking the thermostat and make sure that everything is in the correct setting. You should also check the motorised diverter valve by turning it off and on again, as well as checking the system is being supplied with electricity. If there’s no electrical supply, a fuse might have blown.

There’s a pressure gauge on your boiler and this will tell you whether the system’s pressure is correct. If it’s telling you that there’s been a loss of pressure in the system, it’s up to you to find the problems and sort it before calling on a professional if you need to. It could be due to a water leak, so look for signs of that kind of problem. If the problems arose following maintenance work, you should tip up the system with water via the filling loop. Alternatively, you can call out a professional to do that for you.

The Overflow Not Stopping

When the overflow of your water tank is not stopping as it should, it’s usually a sign that there’s a problem with the tank’s ball-cock. The water tank is in your loft and feeds hot water that allows for heating in system and traditional boilers. One of the things you can try to do is unblock the ball-cock. It’s something that you can often do by yourself, and it’s worth giving it a try. By moving it and getting rid of the jam that’s causing the problem, you should fix the problem completely.

Don’t hesitate to get in touch with us here at Aquatek – Plumbing & Heating Services. We’ll help to get to the bottom of your central heating problems, find the cause and then carry out the repairs that need to be made. Our team is made up of experienced professionals who can carry out specialised work that you can rely on.