Why is My Central Heating Noisy? 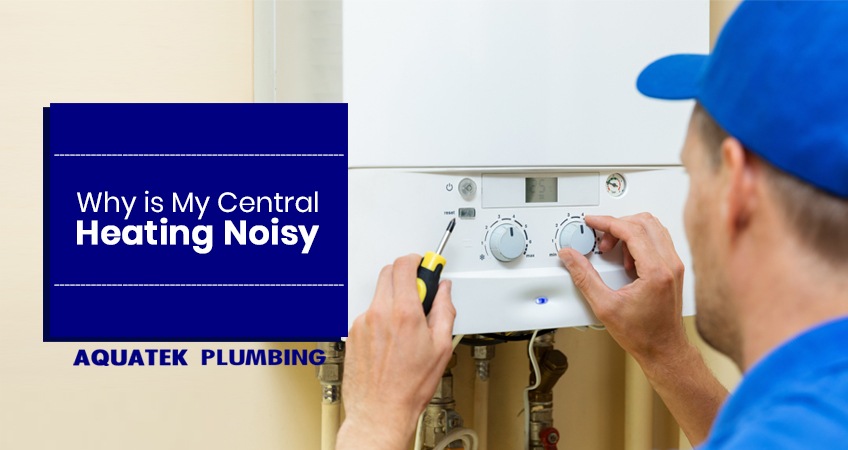 When your central heating system is noisy, there can be a number of issues that contribute to the increase in sound. This could be due to a build-up of limescale, for example, a loose pipe that you’re unaware of or leaking. Your central heating might also be overheating, or perhaps the radiators need bleeding as this is a maintenance task in the home that can often be forgotten about. All of the above are just some common issues that can lead to the clanking, buzzing, and other sounds that you’d usually hear if something wasn’t right.

Central heating shouldn’t be noisy, and if it’s keeping you up at night or causing an abnormal amount of noise, then it’s worth getting it checked out by a professional as soon as possible.

What Are The Common Noises Your Heating Can Make

Humming noises would normally come from the boiler itself, and as a common noise, this is something that tends to be present even when it’s healthy. However, if it’s a loud humming, then it might be that there’s a loose part that’s causing it to hum. It also might be due to the central heating pump, and it can usually be accompanied by a vibration too. Securing this loose part of the pump itself can rectify the problem and help reduce the humming sound. In some cases, your central heating pump might be running too fast, and that’s something that would certainly require the advice and assistance of an expert to solve.

Banging noises can be worrying because you wouldn’t like to associate that sound when it comes to your central heating. It can certainly be an indication that you have a problem with the boiler itself. Sometimes this banging noise can be referred to as a kettling sound. Think about your kettle and the noise it makes as it starts to boil. Does your boiler have a similar sound to that? If so, then it’s definitely worth getting a heating engineer to check it sooner rather than later. It doesn’t necessarily mean that your boiler needs replacing and could be a case of it needing to be flushed out.

Dripping noises are a sound that could suggest a leak somewhere in your central heating system. It could be within the boiler itself or anywhere else around your home, where the piping leads to radiators or the radiators themselves. There are certainly obvious signs that can lead you to the leaks themselves, even if they’re not actively dripping. There will usually be stains where the water has leaked onto a surface in your home, and if that’s the case, it’s good to have someone to come out to fix it. Any type of dripping sound is a sure-fire indication that there’s a leak somewhere, even if you can’t see it yourself.

Gurgling sounds are usually caused by excess air that’s in the pipes or your radiators. When there’s too much air in the central heating system, it acts as a blockage, and that can stop your hot water from circulating around the home properly. That leads to trapped water, which is why you’ll be hearing the gurgling sound. With excess air, you want to bleed your radiators, and this is something you should be doing on a regular basis around your home. You should always try to do it when you’ve gone a long period without using the heating in your radiators.

If you’re not using your heating regularly, your pipes can freeze, and although sometimes it’s possible to thaw them, there’s a risk they can burst. Make sure you’re trying to use them as regularly as possible during the colder months.

Some noises can be similar in sound, but a clanking noise can usually indicate that you’ve got loose piping, or perhaps the boiler’s fan has become obstructed in some way. The clanking can be something that has the same problems as you’d have when it comes to banging in piping and your boiler in general. The same procedure should be taken if you have clanking noises, which is to get out a professional.

What Can You Do To Stop The Central Heating Noise

Your central heating is something you want to really sort out quickly when there are issues. In order to stop the central heating noises above from occurring, you should always look to get an engineer out as soon as possible. Some noises can be resolved, such as bleeding your radiators. However, it’s not advised that you go doing anything beyond this, as it could potentially be dangerous for you and your household. If you’re currently experiencing any noises that aren’t normal, give the professionals a call right away.

Central heating noises are common for the most part when it comes to humming, but if it’s abnormally loud or different sounds are being made, then seek professional help and advice. The longer you leave it, the more of a problem it might become, and that could lead to further problems that end up being more costly for you. Your central heating system isn’t cheap to replace, so make sure you’re sorting these odd noises out when they occur.